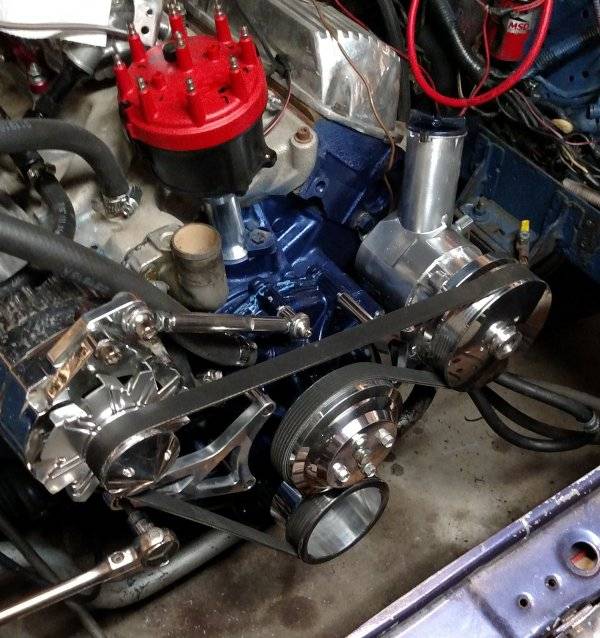 According to Wikipedia, The small block engine that would eventually be identified as the "Windsor" engine was introduced in the 1962 Ford Fairlane. Displacing 221 cu in (3.6 L), it was designed to save weight, using thin-wall casting with a block that does not extend below the centerline of the crankshaft. The engine uses a separate aluminum timing chain cover, which differentiates it from the later 335-Series "Cleveland" engines that use an integrated timing cover. All "Windsor" engines use two-valve-per-cylinder heads, with "2V" and "4V" designations indicating the number of barrels (or "Venturi") in the carburetor. The valves are in-line and use straight 6-bolt valve covers. Coolant is routed into the block via the intake manifold.

The design would soon be bored to 260 cu in (4.3 L) and again to 289 cu in (4.7 L), then stroked to 302 cu in (4.9 L), settling on the most common displacement that would be offered until the engine’s retirement in 2001, nearly 40 years after the basic block design debuted. Two additional displacements were produced during the engine’s history. A 351 cu in (5.8 L) model (stroked from the 302) was offered beginning in 1969 and continuing until 1996. The 351W (so identified to distinguish from the 335-Series "Cleveland" 351C) uses a taller block than the other engines in the series to avoid excessively short connecting rods. Additionally, briefly in the early 1980s a debored 4.2 L displacement engine was produced as Ford struggled with emissions and fuel economy.

In response to the Chevrolet Camaro's success in the SCCA Trans-Am series, Ford engineers developed a new racing engine from the "Windsor" series small block. The first attempt mated a tunnel-port head to a 289 cu in block, but the displacement proved to be too small to deliver the desired power. The next iteration of the engine mated an improved head design to the 302 cu in block, producing the famous "Boss 302." The heads from the Boss 302 would become the production heads on the 335-Series "Cleveland" engines, as the Cleveland engines use the same bore spacing and head bolt configuration as the "Windsor" engines.

As the 1980s drew to a close, Ford begin the design of a new small-block V8 to replace the venerable "Windsor" design. The "Modular" 4.6L OHC V8 would debut in the 1991 Lincoln Town Car, signaling the eventual demise of the "Windsor." Through the rest of the decade, Ford would gradually shift V8 applications to the Modular engine, with the Mustang transitioning in 1996. Even as the "Windsor" neared the end of its life, development continued, with new cylinder heads introduced for the Ford Explorer in 1997. Sale in new vehicles ended with the 2001 Ford Explorer, but the engine continued to be offered for sale as a crate engine from Ford Racing and Performance Parts.

The 351 cu in (5.8 L) Windsor featured a 1.3 in (32.5 mm) taller deck height than the 302, allowing a stroke of 3.5 in (88.9 mm). Although very much related in general configuration to the 289-302 and sharing the same bell housing, motor mounts and other small parts, the 351W had a unique, tall deck block, larger main bearing caps, thicker, longer connecting rods, and a distinct firing order (1-3-7-2-6-5-4-8 versus the usual 1-5-4-2-6-3-7-8, a means to move the unacceptable 'noise' of the consecutive firing adjacent front cylinders to the more rigid rear part of the engine block), adding some 25 lb (11 kg) to the engine's dry weight. The distributor is slightly different, so as to accommodate a larger oil pump shaft and larger oil pump. Some years had threaded dipstick tubes. It had a unique head which optimized torque over high-rpm breathing, frequently replaced by enthusiasts with aftermarket heads providing better performance. The early 1969 and 1970 heads had larger valves and ports for better performance. The head castings and valve head sizes from 1969 to 1976 were different, notably in passages for air injection and spark plug diameters (1969-1974 18 mm, 1975 and up 14 mm). From 1977 onward, the 351W shared the same head casting as the 302, differing only in bolt hole diameters (7/16 inch for 302, 1/2 inch for 351W). Early blocks (casting id C9OE-6015-B) had enough metal on bearing saddles 2, 3, and 4 for four bolt mains, and as with all SBF, were superior in strength to most late model, lightweight castings. Generally the 1969 to 1974 blocks are considered to be far superior in strength than the later blocks making these early units some of the strongest and most desirable in the entire SBF engine family including the 335 series. During the 1980s a four barrel version (intake manifold casting id E6TE-9425-B) was re-introduced for use in light trucks and vans. In 1988 fuel-injection replaced the four barrel carburetor. Roller camshaft/lifters were introduced in this engine in 1994.

The original connecting rod beam (forging id C9OE-A) featured drilled oil squirt bosses to lubricate the piston pin and cylinder bore and rectangular head rod bolts mounted on broached shoulders. There were a number of fatigue failures attributed to the machining of the part and so the bolt head area was spot-faced to retain metal in the critical area, requiring the use of 'football head' bolts. In 1975, the beam forging (D6OE-AA) was updated with more metal in the bolt head area. The oil squirt bosses were drilled for use in export engines, where the quality of accessible lubricants was questionable. The rod cap forging remained the same on both units (part id C9OE-A). In 1982, the design of the Essex V6 engine used a new version of the 351W connecting rod (E2AE-A), the difference between the two parts was that the V6 and V8 units was machined in metric and SAE units respectively. The cap featured a longer boss for balancing than the original design.

The block underwent some changes since its inception. In 1971, The deck height was extended from 9.480 in to 9.503 in (casting id D1AE-6015-DA) to lower the compression ratio to reduce NOx emissions without the need to change piston or cylinder head design. In 1974 a boss was added on the front of the right cylinder bank to mount the air injection pump (casting id D4AE-A). In 1974 the oil dipstick tube moved from the timing case to the skirt under the left cylinder bank near the rear of the casting. These details made swapping older blocks from passenger cars with front sump oil pans to more recent rear-sumped Mustang and LTD/Crown Vic Ford cars more difficult unless an oil pan had the dipstick mounted therein. In 1984 the rear main seal was changed from a two-piece component to a one-piece design.

During the 1990s, motor enthusiasts were modifying 351 Cleveland 2V cylinder heads (by re-routing coolant exit from the block surfaces to the intake manifold surfaces) for use in the 351W resulting in the Clevor (combining Cleveland and Windsor). This modification required the use of custom pistons by reason of differing combustion chamber terrain (canted valves vs. straight valves) and intake manifolds. This combination yielded the horsepower potential of the 351C with the ruggedness of the 351W small block and was possible because more 351C 2V cylinder heads were manufactured than the corresponding engine blocks (the 351M and 400 used the same head as the 351C 2V).

Check them out HERE!

No attributes to narrow your search.