There’s no classic truck that exposes more of its interior than a Chevy Blazer with its top taken off, and that’s exactly why Larry Lashley and his crew at TMI Products of Corona, California customized this two-wheel drive 1970 Chevy Blazer for the 2016 SEMA Show. The SEMA Show, held annually in Las Vegas, is where TMI Products rolls in deep each year with an array of show cars to wow folks in the industry with its latest and greatest interior designs and exterior cosmetic enhancements. The Southern California company made its name offering custom interior packages for Ford Mustangs, Chevy Camaros, VW Bugs, and then quickly expanded into Ford and Chevy pickups. Since TMI already offered a comprehensive line of Chevy C10 interior pieces the easy part was deciding a two-wheel drive Chevy Blazer would be the hot ticket for SEMA; but finding a two-wheel drive Chevy Blazer to build wasn’t quite so easy. It took Larry months of searching before he ran across a 1970 K5 Blazer on Craigslist, and then it was a race to pay full asking price before another person in hunt of a Blazer beat him to the punch. The Blazer’s build, excluding taking care of the upholstery work and laying on the body and paint, was entrusted to RnG Customs, Classiscs and Fabrications of Hesperia, California. Don’t let RnG Customs’ misspelling of classics fool you, Ron and Gabe can really get down and knock out some cool stuff. Starting from the chassis up it was a no-brainer the 1970 K5 needed to be dumped deep in the weeds in order to give SEMA goers a bird’s-eye view of the truck’s full-custom TMI interior. 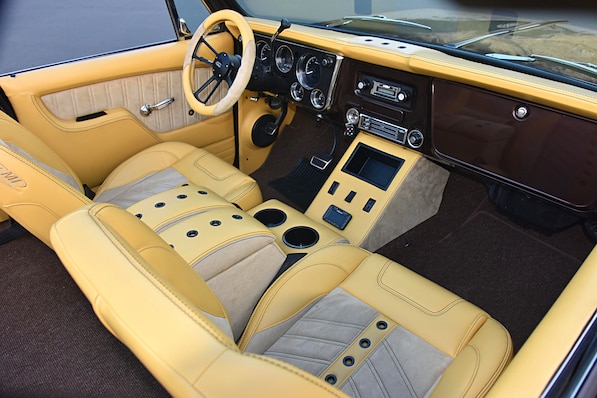 The stock 1970 Chevy K5 chassis received a C-notch and then CPP 2 1/2-inch drop spindles with RideTech air ride suspension was installed. The braking system was upgraded significantly to Baer Brakes four-wheel disc brakes with 14-inch six-piston calipers in front and 12-inch four-piston calipers in the rear. The Blazer’s 12-bolt rearend was given a total go-through by J&S Gear Co. of Huntington Beach, California. For rolling stock in front, American Racing VF 498 bronze satin lip 20×9 wheels were stuffed into 265/35-20 Continental ExtremeContact DWS 06 tires, and in the rear American Racing VF 498 bronze with satin lip 22×10 mounted with Continental 285/30/22 ExtremeContact DWS 06 tires were fitted. The previous owner modernized matters under the K5’s hood and transplanted a 5.3 plucked from a 2008 Chevy Silverado. Then under TMI’s ownership a host of ancillary performance upgrades were added that included a K&N air filter and Doug Thorley headers paired to Flowmaster mufflers. Full instrumentation from Dakota Digital keeps an eye on how all drivetrain systems are running, and an Odyssey battery keeps the 12V juices flowing. 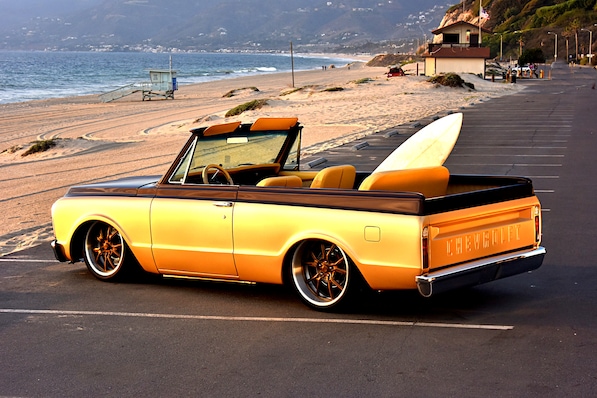 The K5’s exterior got the TMI sport products treatment with a host of new trick goodies debuting at SEMA for 2016. In front it took a combination of TMI’s air dam combined with a Brothers chrome smoothie bumper and HIDprojectors.com headlights to get the right look. Going topless full time was made to look cleaner by installing a TMI windshield frame cap and TMI bedside filler caps. The butt end of the Blazer was capped in style with a chrome smoothie rear bumper from Brothers. Johnny’s Auto Color of Riverside, California, did the custom paint and bodywork on TMI’s SEMA Blazer. The DOT marker lights and tailgate were shaved, and then answering Larry’s request to “give it a nostalgic feel with a modern twist” Johnny’s two-toned the K5 PPG root beer brown and Champagne Gold.

The crowning glory of the K5 Blazer is its TMI Products custom interior kit. It took a very short six months time from tooling up to manufacture Blazer custom upholstery kits to when this 1970 Chevy Blazer drove onto the 2016 SEMA Show’s floor. Starting from the floorboards up TMI guys laid down Heatshield Products’ thermal mat and sound insulation, and then installed TMI Products’ German weave carpeting. The front seats are a pair of TMI Classic Pro Series buckets done in vinyl with a rear seat covered to match. Also color-keyed to tie in is a TMI Sport R steering wheel, padded TMI Sport XR dash cover, door panels, and rear inside quarter-panels. Pondering the Blazer’s build Larry recollected, “About two days before leaving for SEMA I got a text from the seller wanting to know how the Blazer came out. I sent him a few pictures and he asked if he could buy it back. I said ‘I’m sorry man, but this Blazer will be on the show circuit for sometime.’ I guess he must have gotten back together with his ex, or met a new girl, who knows?”

Want a custom interior like this for your ride? Call us! We can make it happen for you!

No attributes to narrow your search.